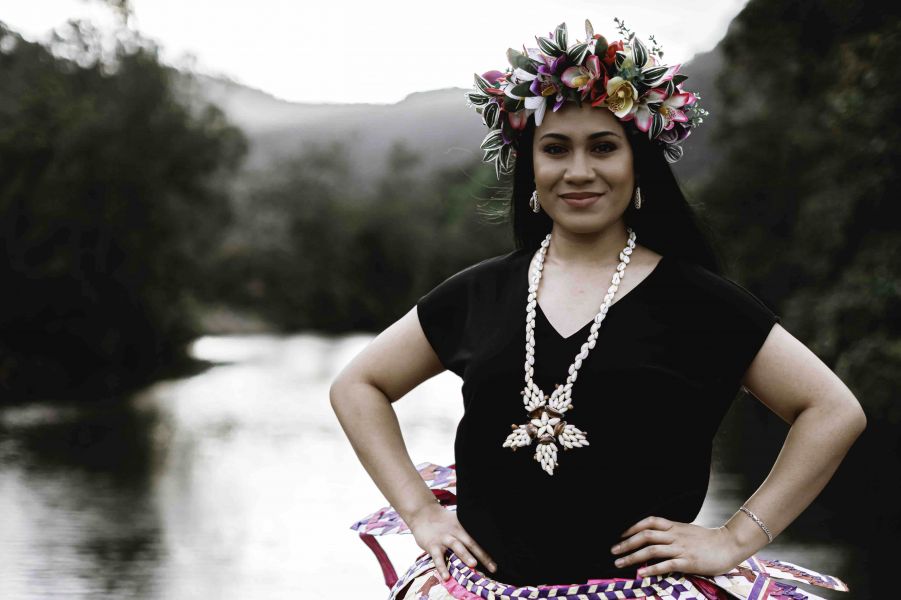 Tuvalu is the smallest Pacific Island state, with a population of less than 13,000 people, predominantly Polynesian, located to the north of Fiji and immediately south of Kiribati. The former British colony is a series of nine coral atolls, of which eight are inhabited. None is more than 1.5 metres above sea level. Consequently, Tuvalu is extremely vulnerable to rising sea levels.

Cairns Institute Post Graduate Fellow Betsy Misiaga is a Tuvaluan student working on a Masters in Global Development degree to help her home country, supported by Cairns Institute Director, Distinguished Professor Stewart Lockie, and Adjunct Research Fellow, Simon Towle. While her project Toku Fenua Tuvalu has been disrupted by COVID-19, Betsy has been able to maintain relationships with the Tuvalu government via Zoom, partnering with the Queensland Children’s Health Good Start program to produce a resource for schools in the Tuvaluan language.

Toku Fenua Tuvalu is a community-led project founded on three research themes; Olaga lei - Health, Tuu Mo aganu – Culture and education and Atufenua – Environment. The main outcomes of the research will result from collaborations with the people of Tuvalu in a climate adaptation project designed to improve health and nutrition, preserve culture, raise awareness of climate change, and improve environmental management. An important component of the project is to provide mentoring to empower young Tuvalu (and other Pacific Island leaders) to assist them to make informed decisions to better prepare for an uncertain future.

Olaga Lei - the health and nutrition component of the project – is designed to reduce the incidence of non-communicable diseases such as diabetes and cardiac issues. It will also focus on healthy children and healthy families, and will involve developing culturally appropriate resources in language. The project uses traditional Tuvaluan motifs, such as Pulaka the taro leaf, which will feature in a guide to healthy eating, health and physical activity, and diabetes management.

Atufenua - the environmental theme - incorporates a focus on waste management, addressing the issue with a zero-waste philosophy, re-purposing waste material wherever possible, and seeking low cost solutions and better policy outcomes wherever possible.

Toku Fenua Tuvalu is a long-term project designed to assist the island nation’s leaders to prepare for a cultural transition to new homes in response to rising sea levels, while enhancing health and environmental literacy and numeracy in the meantime.

Another important feature of Toku Fenua Tuvalu involves strengthening relationships between the people living on Tuvalu and the diaspora of Tuvaluan communities living in Australia and New Zealand.  The aim is to raise the profile of Pacific Island issues in Australia and New Zealand. It is a long-term project that will involve collaborations with many partner organisations. Future collaborations will likely include CSIRO, the New Zealand Government, International and Pacific NGOs, Pacific universities and agencies, such as the South Pacific Regional Environment Program (SPREP).

Toku Fenua Tuvalu will involve a series of collaborations with the Tuvalu Government, Queensland Health (in the development of Olaga Lei resources in Tuvalu language), The Cairns Institute and JCU Connect.

The Toku Fenua Tuvalu project is still in its planning phase and we are seeking funding; detailed funding proposal is currently being prepared, and if successful, the pilot project could commence early in 2021.