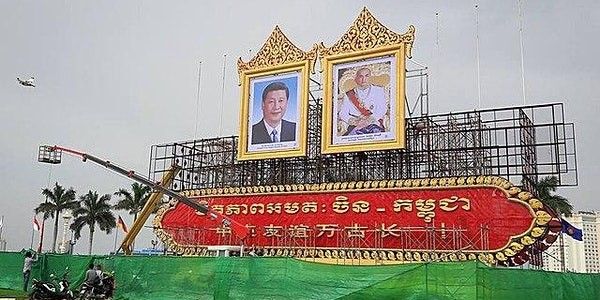 On 13 April 2022, The Cairns Institute’s Research Fellow Dr Kearrin Sims and Griffiths University PhD Candidate Sovinda Po delivered a joint presentation to The Australian National University’s Coral Bell School of Asia Pacific Affairs and Australian Centre on China in the World (CIW). The presentation marked the launch of CIW’s Global China Research Spoke’s new seminar series, and was titled “The myth of non-interference: Chinese foreign policy in Cambodia.”
Building on Po and Sims 2021 Asian Studies Review article of the same name, the seminar focused on Beijing’s non-interference rhetoric through a case-study analysis of Cambodia. Discourses of “non-interference” features prominently in China’s so-called “peaceful rise” and “win – win” approach to international diplomacy. However, Po and Sims argue that Beijing’s “non-interference” rhetoric is not demonstrated in the context of Cambodia, where China has repeatedly interfered to reinforce Prime Minister Hun Sen’s leadership during times of political contestation. To make this argument, Po and Sims offered a historical summary of Chinese interference in Cambodia followed by an analysis of the key domains in which Hun Sen’s regime supports Chinese geostrategic interests. These are: support for Beijing’s One China Policy and its Belt and Road Initiative; support for Beijing in negotiations with ASEAN; and support for Chinese economic interests. These domains, so Po and Sims argue, contribute to the advancement of China’s “core national interest”, and have been prioritised by Beijing over its principle of non-interference.