Moving in the Rights direction 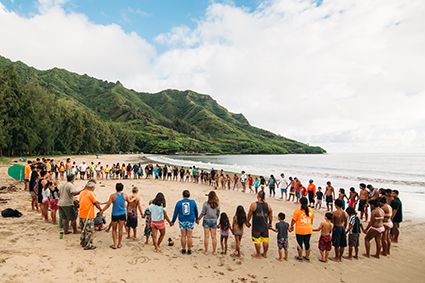 Debates about averting a global ecological emergency often focus on how much land and sea to  protect. A huge expansion of protected areas, to 30% by 2030, has been pledged ahead of  negotiations of new global biodiversity targets in October 2020. But focusing on what or how much to conserve detracts from potentially more important debates about how conservation is done, by  whom and with what outcomes.

Despite a long history of conservation and studies about it, successful conservation has been the  exception rather than the rule, and there has, until recently, been a lack of clear evidence for what  works and why. However, a new article published in the journal Ecology and Society reviews evidence from the growing number of interdisciplinary studies, which apply more joined-up thinking  to conservation design, process and outcomes, and the analysis provides striking insights with far reaching implications.

A stark contrast exists between conservation led by Indigenous Peoples and local communities and  initiatives under the control of states, NGOs and private companies. When Indigenous Peoples and  local communities play a central role, for example resource access and decision-making are allocated  according to local systems, positive conservation and wellbeing outcomes are far more likely  compared with externally-controlled interventions that involve changing local practices.  Furthermore, we found that over a third of externally-controlled interventions resulted in ineffective  conservation at the same time as producing negative social outcomes. A key implication is that the  most important factor in achieving positive conservation outcomes is not the level of restrictions or  magnitude of material benefits provided to local communities, but rather recognising local social  and cultural practices and capacity to make decisions.

Empowered local communities can provide effective environmental stewardship  Locally-controlled conservation produces better outcomes because it fosters active and collective  stewardship of the environment. Such approaches can establish a shared vision for the landscape  communities inhabit and mobilise people to preserve, restore and defend it while adapting to any  threats or changes.

Our review nevertheless uncovers that local institutions are every bit as complex as the ecosystems  they govern, and that a number of factors must align to realize successful stewardship. Simply  granting control to local communities does not automatically guarantee conservation success.  Community cohesion, shared knowledge and values, social inclusion, effective leadership and  legitimate authority are important ingredients that are often disrupted through processes of  globalisation, modernisation or insecurity, and can take many years to reestablish. Additionally,  factors beyond the local community can greatly impede local stewardship, such as laws and policies  that discriminate against local customs and systems in favour of commercial activities.

Our study reveals that efforts to implement externally-derived conservation regulations tend to fall  short of their aims because enforcing and properly mitigating local exclusion requires resources far  beyond those normally available. They often place unrealistic restrictions on people’s livelihoods  and, consequently, result in forms of resistance, ranging from subtle renegotiation to more physical  struggle. Where exclusive conservation is well financed it can be successful in the short-term, but  the harms experienced by Indigenous Peoples and local communities are often socially unacceptable.

Market-oriented conservation initiatives using the private sector to raise finance and to provide  incentives or compensation for local communities, commonly through livelihoods based on tourism  or commodity production, embody one strategy for reconciling conservation and social goals.  However, the evidence shows that material benefits frequently reach only a fraction of the affected  communities and, with insufficient attention to local values and the inclusion of marginalised groups,

Our findings suggest that equitable conservation, which empowers and supports the environmental  stewardship of Indigenous Peoples and local communities represents the primary pathway to  effective long-term conservation of biodiversity, particularly when upheld in wider law and policy.  Whether for tiger reserves in India, coastal communities in Brazil, or wildflower meadows in the UK,  the evidence shows that the same basis for successful conservation through stewardship holds true.  Whether the approach is described as a ‘Nature-Based Solution’, carbon or biodiversity offsetting,  restoration, rewilding, payments for ecosystem services, protected areas, private conservancies or  some other form, the most important questions are not how much will be protected or how much  money is available, but how it aims to conserve: whether through excluding Indigenous Peoples and  local communities or through recognising their rights, roles in decision making, and potential  stewardship. Approaches that affirm local rights are most likely to be successful in the long-term,  while continuing those exclusive approaches that have performed poorly for people and nature are  no longer justifiable.

The policy message - put in motion a transition towards more equitable and effective conservation Current policy negotiations, especially the forthcoming UN climate and biodiversity summits, must  embrace and be accountable for ensuring the central role of Indigenous Peoples and local  communities in mainstream climate and conservation programs. Otherwise, they will likely set in  stone another decade of well-meaning practices that result in both ecological decline and social  harms. Supporting local communities’ rights of access, to influence decisions that profoundly affect  their lives and cultures and to act as stewards of the environment should not be viewed as a radical  approach. On the contrary, our study communicates an optimistic message for people and the  planet: Conservation can become more effective through an increased focus on governance quality,  and on fostering solutions that reinforce the roles, capacities and rights of Indigenous Peoples and  local communities. The solutions are available but the necessary transition in mainstream  conservation efforts towards recognising and supporting local institutions will require humility and a  significant reorientation among the conservation organisations, funders, and governments who  currently exercise control over global conservation efforts. If successful, this is capable of ushering in  a new era of collaboration with, support for, and stewardship by Indigenous Peoples and local  communities that enhances prospects for both environmental conservation and human wellbeing.

This work was supported by the International Union for the Conservation of Nature Commission on  Environmental, Economic and Social Policy (IUCN CEESP) and through the ‘Just Conservation’ project  funded by the Centre for the Synthesis and Analysis of Biodiversity (CESAB) of the French Foundation  for Research on Biodiversity (FRB), www.fondationbiodiversite.fr

Moving in the Rights direction