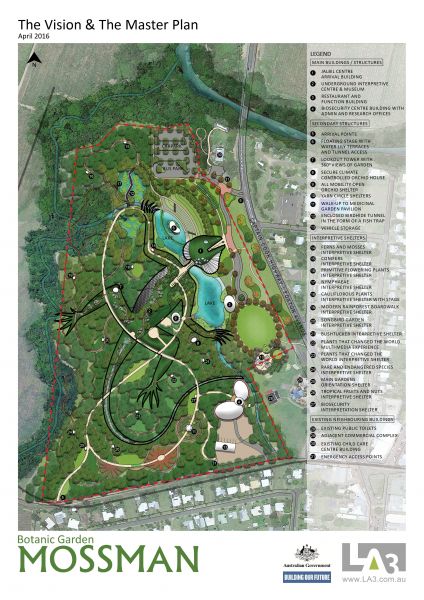 The Mossman Botanic Garden will be located at the epicentre of biodiversity in Australia. Uniquely, Mossman, bounded by the Daintree National Park, is the only place in the world where two natural World Heritage areas - the Wet Tropics Rainforests and the Great Barrier Reef – exist side-by-side. The Douglas Shire is the most biodiverse local government area in Australia.

Mossman Botanic Garden emphasises conservation through understanding by bringing together the world’s old living rainforest with one of the world’s oldest living cultures, working closely with the Eastern Kuku Yalanji people on every aspect of the Garden’s design and development. The Garden’s charitable purpose is the protection and enhancement of the natural environment, focusing on tropical rainforest flora; and the provision of research, learning, training, education and information about the natural environment, focusing on tropical rainforest botany.

James Cook University continues to play a pivotal role in the development of the Mossman Botanic Garden project. Professor Darren Crayn, Director of the Australian Tropical Herbarium, and his staff at James Cook University, are working closely with the Gardens on design, biosecurity and appropriate planting regimes. The Garden has just commissioned the Herbarium to develop and prepare the botanical and horticultural plan for the Garden. The Plan is being developed to position the Garden as a global contributor to botanical knowledge, filling the international gap in Australian wet-tropical, lowland rainforest flora. The Plan is based on Australia and New Zealand’s Decadal Plan for Systematics and will align with plans of gardens such as RBG Kew in Europe, Fairchild in the USA and the public botanical garden sector in Australia. Further, the Plan will set out the relationship between the Garden and the Herbarium, with the Garden providing a living collection and the Herbarium providing a preserved collection, with the living collection recorded and indexed as if it was a preserved collection in a herbaria.

Cairns Institute Adjunct Research Fellow Simon Towle has been on the garden’s board of directors since 2017 and was recently re-elected for a further term. In an earlier role as Director of Conservation Programs for the World-Wide Fund for Nature (WWF) in New Zealand, Simon managed a large scientific research program, and substantial curriculum-linked botanical education program in collaboration with Wellington City Botanical Gardens. He is planning a similar program for the Mossman Botanic Gardens.

Despite the impact of COVID-19 on the Australian economy, the financial year ending 30 June 2020, has been one of quiet but consistent preparation and development behind the scenes for the Mossman Botanic Gardens. During the year, the board of directors and management have strengthened governance, management, risk planning and quality assurance including successfully completing the transition from an incorporated association under Queensland law to a company limited by guarantee under Commonwealth law, secured forward commitments of nearly $1 million in funding and cemented strategic relationships with the Australian Tropical Herbarium, Jabalbina Yalanji Aboriginal Land Corporation and Douglas Shire Council.

The Mossman Botanic Gardens now has a growing membership and financial supporters committed to the vision for the gardens. The largest donor is the philanthropic Calvert-Jones Family and the John and Calvert Jones Foundation.

The Mossman Botanic Gardens annual report for 2020 has just been published and may be viewed here.

Images courtesy of the Board of Mossman Botanic Gardens