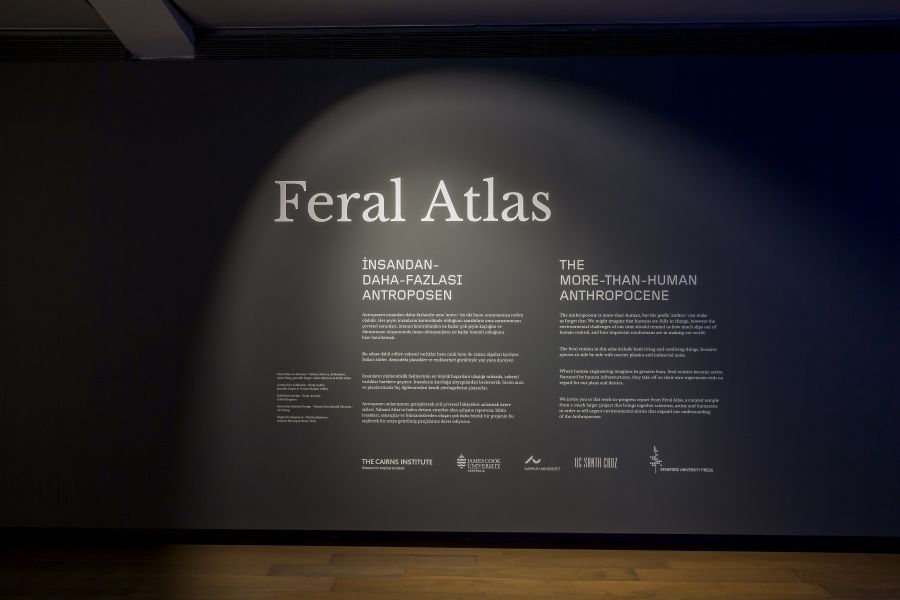 In September last year the 16th Istanbul Biennial officially opened, unveiling its theme of ‘The Seventh Continent’ to a packed room of cameras and international Press. The Cairns Institute’s Theme Leader for Creative Ecologies,  Associate Professor Jennifer Deger, spent six weeks working in Istabnbul preparing for this opening, invited to exhibit her latest transdisciplinary project, “Feral Atlas: The More-than-Human Anthropocene”, and proudly representing James Cook University and The Cairns Institute at what was arguably the most highly anticipated international art event of the year.

The Istanbul Biennial marked the first exhibition and public presentation of this major transdisciplinary work-in-progress. Feral Atlas brings together more than a hundred scientists, humanists, designers and artists to examine the un-designed effects of human infrastructures. Creating a transdisciplinary view of Anthropocene processes, the collective shows how ordinary, taken-for-granted infrastructures, such as plantations, shipping routes, factories, dams, power stations and drilling rigs, produce ‘feral effects’. These effects, Feral Atlas argues, are the Anthropocene.

JCU PhD candidate, Victoria Baskin Coffey, a member of the Visual Digital Material research group, co-curated the Istanbul exhibition. The JCU team selected a number of reports from the atlas to put on display, each focusing on a particular ‘feral entity’. These include a mud volcano that emerged next to a drilling rig in Indonesia, water hyacinths that have affected the Bengal Delta as a result of 19th century railway infrastructure, underwater noise pollution in the Arctic, and marine plastics in the Pacific Ocean.

The Biennial was entirely free to the public and the Feral Atlas exhibition alone welcomed over 10,000 visitors on its first opening weekend. Jennifer and Victoria were also invited to co-curate Feral Atlas for the Inaugural Sharjah Architecture Triennial in the United Arab Emirates later in the year.

These exhibitions showcase the exciting potential for the future of Environmental Humanities at James Cook University and The Cairns Institute. They ask how might we bring different methods and disciplines together in order to not only see the world differently, but to find ourselves located in new and urgent relationships with more-than-human worlds. They explore how a re-envisioning of the relationship between art, anthropology, and science might result in the refracting of multiple points of view—and so enable new ways to see, recognise and potentially address the urgent environmental challenges of our times.