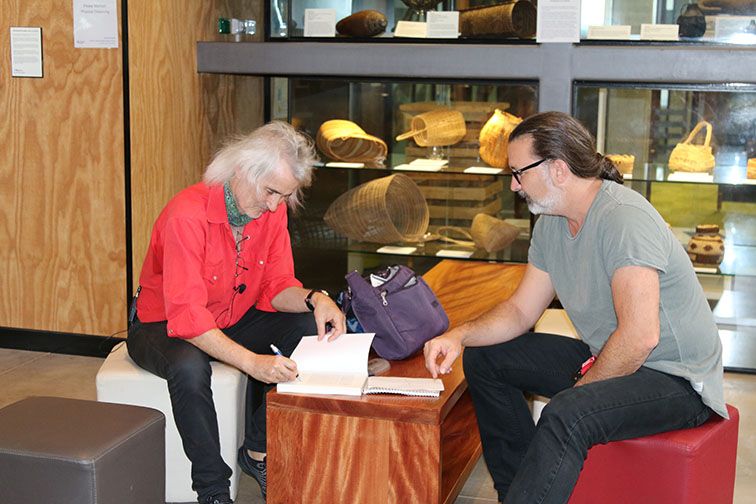 Professor Ernest Hunter, an Adjunct with The Cairns Institute, recently published a book titled Reef Madness: Digging up the dirt on an Australian myth. The book centres on how for generations, Ion Idriess was Australia’s most popular author and Lasseter’s Last Ride – the story of a failed prospecting expedition in 1930 – was his first success and was the foundation stone of a quintessentially Australian myth.

In collaboration with the Cairns Tropical Writers Festival, Ernest presented a public lecture on the 12th August at the Institute. This lecture which was attended by over 40 people discussed how authors such as Idriess portrayed Indigenous Australians using quasi-ethnographic descriptions of traditional Aboriginal ways and wiles as central plot devices. This misrepresentation was further perpetuated in other popular literature and in major motion pictures, with little or no contact with Indigenous Australians. With the country being in the depths of the depressions, these popular representations of Indigenous Australians in the decades before and following the Second World War are presented to demonstrate how Idriess – and others – commodified a primitive exotic in an era before television drew the public gaze elsewhere.

Ernest is a psychiatrist who has worked for more than three decades in remote northern Australia. Most of that time being in the Cape York region and the Torres Strait Islands. He has numerous academic publications and has also authored Aboriginal Health and History: Power and Prejudice in Remote Australia (Cambridge University Press, 1993), Vicarious Dreaming: On Madman’s Island with Jack Idriess.

Reef Madness: Digging up the dirt on an Australian myth, is available from instore or online at Cairns Books