Connecting people to country through education 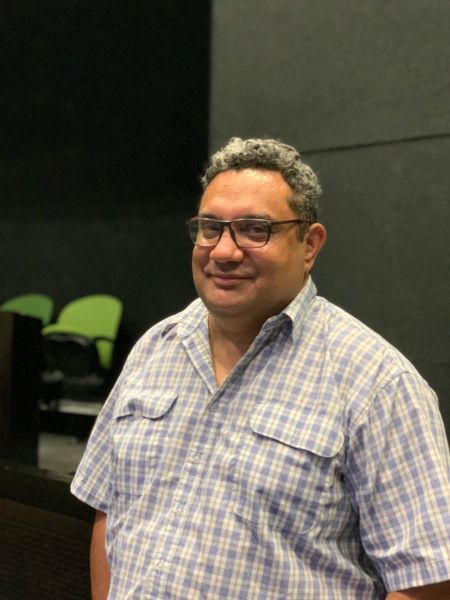 The Cairns Institute’s Research Fellow, Dr Vincent Backhaus had the opportunity to speak with radio host Trevor Tim on Bumma Bippera Media’s TalkBlack in May.

As one of very few Aboriginal and Torres Strait islander scholars working in the Tropical Far North Queensland research space Vincent and Trevor had much to talk about. Their conversation traversed Vincent’s own journey; from his career pivot; an aircraft maintenance engineer to a James Cook University undergraduate student in Cairns, then to his completion of a doctorate in Indigenous Education from the University of Cambridge, United Kingdom. Trevor’s drive to interview individuals such as Vincent is part of his passion to raise the profile of Aboriginal and Torres Strait Islander people and share their stories with others in the community and abroad. Vincent’s journey is one of those stories and with that his continued connection to country and people make up a large part of who he is today.

After talking through his own story, Vincent also discussed the research project he is currently working on, the Crown of Thorns Starfish (COTS) Reef Traditional Owner co-design, values and governance assessment project.

Vincent had just presented on his work at the Cairns Institute Impact and Engagement Seminar and his project which is co-investigated by Distinguished Prof Stewart Lockie, Associate Prof Felecia Watkin Lui (JCU IERC) and Dr Kirsten Maclean (CSIRO) seeks to explore a Traditional Owner led community of practice framework which aims to support Traditional Owner aspirations and to inform the development and deployment of COTS management options which reflect Reef Traditional Owner values.

From here their conversation focused on the promotion of Aboriginal and Torres Strait people in sea and land country spaces and how the governance mechanisms between traditional and western structures and science need to meet in the middle. Vincent explained that the his project is both challenging and rewarding and that one of his main focus is on how to effectively support traditional owners to be able to advocate for what they want in terms of reef futures and COTS management.

Vincent’s project is part of a larger Crown of Thorns Control Innovation Program, funded by the Reef Trust Partnership, which is a seeking to further develop innovative methods that improve the efficacy of COTS control and surveillance.

The interview lasted close to 40 mins however both Trevor and Vincent could have talked for hours about the many challenges and privileges they both experience in the research and media sectors but the main message as Vincent explains: ‘is about the conversations that need to be had with regards to connecting people to Country through Education and the importance of opening and supporting education pathways for the next generation of First Nation thinkers and leaders’.

It is envisioned that more collaboration can be had between BBM and the various research project within The Cairns Institute particularly relating to First Nations and Indigenous Futures, so watch this space. Bumma Bippera Media’s TalkBlack is a national talkback show focusing on current affairs and issues of importance to Indigenous people right around Australia it airs weekdays at 11am tune in and listen on 98.7 FM.

Connecting people to country through education