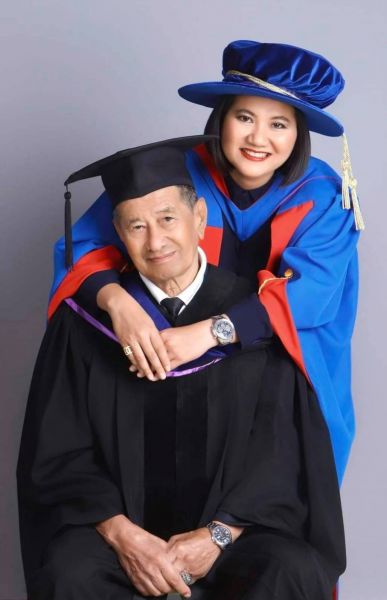 Alisa hails from Thailand and had been supervised by Distinguished Professor Stewart Lockie and Dr Theresa Petray. She submitted her thesis in 2018 and had to leave Australia for Thailand as her father and mentor (pictured above with Alisa) was gravely ill. Alisa had hoped to celebrate her completion with the many friends she had come to know whilst based at The Cairns Institute.

“During the six months, after my thesis submission, I had received feedback from two committees for minor revisions. Whilst looking after my father at the hospital in Bangkok who was recovering from heart surgery, I also had to edit my thesis.” In addition, Alisa said she still had to make frequent flights between Bangkok and Pattani where she is a lecturer at Prince of Songkla University, Pattani campus.

When her thesis was finally approved, JCU posted her PhD certificate to her and she was elated.
“A month later, I received an unexpected envelope from Australia with ‘DO NOT BEND’ stated. I had no idea what was inside. When I opened the envelope, there were two letters; the first was titled “Dean’s Award for Research Higher Degree Excellence” to for demonstrated excellence in the completion of the research degree of Doctor of Philosophy. The second letter explained that I had been chosen by the Advisory Panel and College Dean based on the examiner reports for my thesis. I was the recipients the 2019 recipient for this award and I chosen from 108 JCU researchers who graduated in 2018. “

In 2020, Alisa had intended to present her continued research at the XV World Congress of Rural Sociology, however, due to the pandemic, this was postponed to 2021, then 2022. During this period, Alisa’s father passed away but she was grateful to have been able to spend his last years with him.

Alisa was finally able to attend the conference in July and she presented her research titled “Psychosocial Support: Situation Analysis of Children in the Southern Border Provinces 2018-2019”.
Alisa was excited to be invited by the convenor to participate as a discussant for Prof Nora McKeon’s keynote presentation on Food Governance and Food security. “As a discussant, I had five minutes to introduce myself, share a few key reflections on how Prof McKeon’s presentation touches on my own work, and pose questions to her. I was very honoured to be invited.”

Alisa added a visit to Nguma-Bada campus at Smithfield to reunite with her JCU friends and colleagues. She had planned to take photos in her gown with her supervisors and Cairns friends. She explained “that it was important to capture a photograph with my Cairns’ friends – Vyvyen, Daniela, Helen and Mahar. They were the ‘wind beneath my wings’; who looked after me while I studied for my PhD in Cairns.”

As a lecturer in the Social Development Department at Prince Songkla University, her work includes championing social change for women, disaster, environment and children in the conflict zone in the Deep South of Thailand. 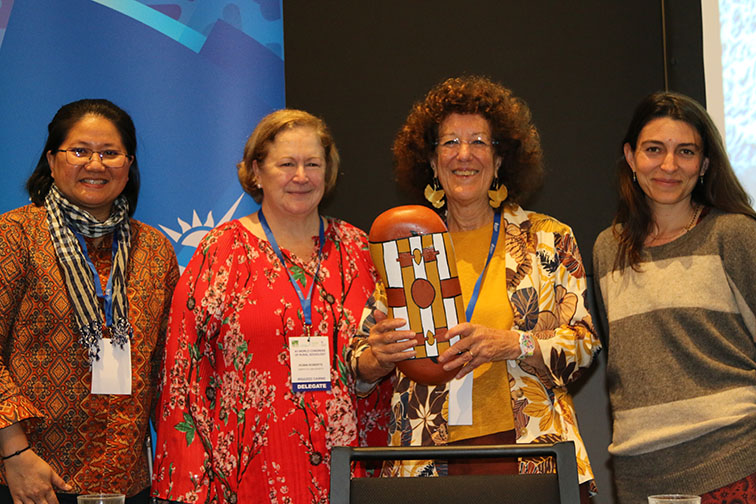