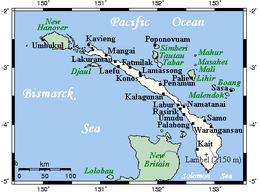 On 15 March 2022, the Cairns Institute Adjunct Professor Craig Volker joined colleagues from Papua New Guinea (PNG) and Germany in an online panel discussion at the Lowy Institute Australia - PNG Network to discuss languages in PNG in light of the United Nations Decade of Indigenous Languages (2022 - 2031).
PNG has more languages than any other country in the world, but increasingly many children are not learning their ancestral languages and families are switching to Tok Pisin. While there are concerns, there are also surprises. In 2020, a newly recognised language in New Ireland, where Volker has his home, was added to PNG’s list.
Participants discussed the importance of local languages to identity and connections to ancestral land. University of Papua New Guinea (UPNG) linguistics lecturer Sakarepe Kamene, explained how he is only accepted by his own clan when he uses their ancestral language. Volker emphasised the necessity of community consultation in the process of language documentation and showed how this has worked out in his own research into the Nalik language.
He explained how it is important that overseas researchers listen to community leaders and the goals that they themselves have for the development and documentation of their language. He also pointed out that Papua New Guineans have much to teach Australians about how to live comfortably in a multilingual and multicultural society.
You can watch this event on YouTube and at the Aus-PNG Network Facebook page.

During the nineteenth and early twentieth century, western academics collected human remains from the many societies they encountered, often treating them with no more respect than they would flora and fauna specimens. In recent years, there has been a growing awareness in western countries that this was unethical. At the same time, there have been increasingly louder calls from formerly colonised people to return the remains of their ancestors to their homelands.
Recently the Übersee Museum in Bremen, Germany discovered a crate with decorated skulls of two women and three men from New Ireland, Papua New Guinea, that had been “collected” in the former German colony prior WWI. Until around 1930, skulls were often exhumed from graves in central New Ireland societies and decorated with bee wax, lime, paint, and plants to be used in rain-making and other ceremonies. These skulls were often taken by European missionaries, explorers, and plantation owners as exotic souvenirs. The practice died out under the influence of missionaries and colonial administrators.
Curators contacted The Cairns Institute’s Adjunct Professor Craig Alan Volker to try to identify the New Ireland clans from which the skulls were taken. The current museum staff have a policy of working with the Bremen State Government to return all human remains in their collections to their homelands. Volker says that after so many years it will be extremely difficult to ascertain exactly where the provenance of the skulls lies, particularly since the skulls arrived at the museum with very little documentation. Nevertheless, it is important to make the effort to record any oral history related to the skulls. As a person of German descent living in New Ireland, he sees this as an important step in the reconciliation of Germans and New Irelanders with their shared colonial experience.