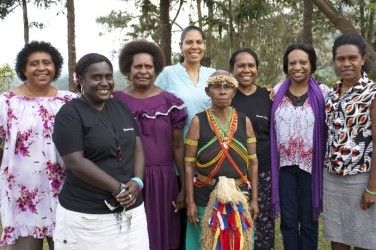 On 8 March 2022, Teddy Winn joined a small group of distinguished women scholars in Australia and PNG via zoom to discuss issues related to political and socio-economic empowerment of women in Papua New Guinea (PNG), and across the Pacific. These women are members of a project that is placed under the Pacific Women’s Political Empowerment Research Group (PWPERG); a research group of The Cairns Institute. The group raised key issues pertaining to women’s political and socio-economic representation. The following were some ideas emanating from the discussions, with emphasis from his present research.
It was widely acknowledged that women in PNG and across the Pacific are grossly underrepresented in their respective elected legislatures. For instance, PNG has had only seven women legislators since independence in 1975, and its 10th parliament (current) consisted of all male MPs. Politics in PNG, and across some Pacific Island Countries (PICs) is male biased. Women’s representation in government, business, and industry, although well documented, was comparatively lower than their male counterparts, owing to ongoing global disparities/inequalities.
A recent study by the Pacific Private Sector Development Initiative (PPSDI) found that the global average ‘rates of representation’ of women holding board seats, board chair positions, and CEO positions were 16.9%, 5.3%, and 4.4% respectively. For the Pacific, the average rates of women’s representation across these three positions as a share of the global average were 21%, 11%, and 13% respectively. Meanwhile, in PNG, the rate of women’s representation in business (across these three positions) as a share of the regional average were 19%, 4%, and 2% respectively. Women’s representation in PNG overall is poor, not only in politics and business, but across both the formal and informal sectors.
Taking the above analysis into account, Teddy presents thoughts regarding his current research; part of which is devoted to understanding the concept of the ‘big man’ (bigshot) system (more recently, some PNG followers referred to ‘big man’ figures as ‘daddy boss’), and his role in government corruption. What Teddy found interesting is that the role of women in politics (government/business/leadership) has often been overshadowed by the massive cultural and structural factors associated with a predominantly patrilineal society. The preponderance of men in politics and business have always placed women leaders and entrepreneurs in a precarious position. The term ‘big woman’ or ‘bigshot woman’ (sometimes, ‘mummy boss’) was recently coined in reference to the emergence of a new class of PNG women leaders in urban spaces (an example is the late Janet Sape, a successful businesswoman and a one-time political candidate) who had stood shoulder to shoulder with male counterparts. Beyond that, majority of the womenfolk in rural areas continued to be subservient to their husbands and male relatives. Most women remain ‘invisible’.
Political discourse pertaining to the role of ‘big woman/big shot woman’ has not been investigated at any significant length by scholars interested in government corruption and politics in PNG. Traditionally, the role of women in society has always been downplayed largely by patriarchal dispositions. Most PNG societies are patrilineal, except for several places, like parts of Bougainville and East New Britain (Tolai society), that have matrilineal kinship systems. Unfortunately, this status quo has not experienced any significant shift in contemporary PNG politics. Although there are well documented cases of corruption allegations among some women leaders in government and politics, this is usually overshadowed by a large gender inequality gap, cultural constructs, and other structural factors, such as political competition, lack of political will, and money politics. A biased appointment system and an unfavourable business climate that favours ‘big men’ or ‘bigshots’ are other notable structural issues that face women leaders in PNG.
Many PNG women have a passive voice in society and are politically timid or inactive. Most times they tend to disagree or do not support women candidates or leaders in politics, government, and business. Their passiveness means that they become targets of domination, and therefore, are easily influenced by the male members of their communities.
National institutions representing women are weak, or dysfunctional. For instance, the importance of the PNG National Council of Women (NCW) – an institution with twenty-two representations created under the Department of Community Development and Religion to drive awareness and mobilise women’s voices was ruined due to funding limitations, in-house politics, poor coordination, and lack of political will. These factors tend to push women leaders and their role in government, politics, and business to the periphery, consequently placing the onus of leadership on big men.
In order to understand the various social constructs and how they have ‘engineered’ the gendered roles across different sections of PNG society (and the Pacific), one needs to apply the ‘emic’ approach. Unless we understand the context, we would be less likely to identify the different forms of power and leadership structure women across PNG and the Pacific are trying to cultivate – to be empowered.